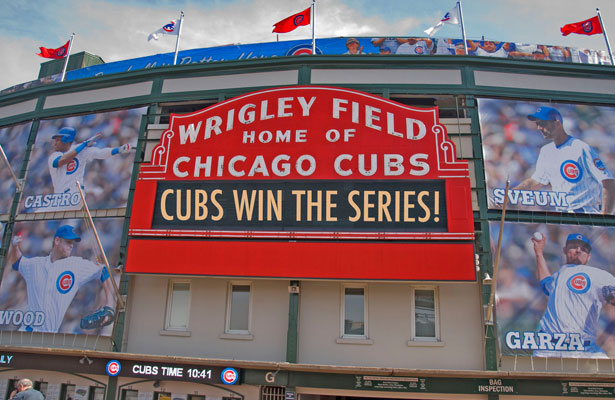 Chicago has been basking in the glory of their game seven victory in this year’s World Series, the Cubs first in 108 years.

Someone mentioned to me the other day that the Cubs start their night games at 7:08 PM, which in military time is 19:08 – or 1908 – the year the Cubs last won the World Series. There’s a huge amount of folklore and history behind this team that had been affectionately referred to as the “lovable losers”.

I’ve been in Chicago for 26 years and last week’s experience was exceptional, but being a local there is so much more to the story of the Cubs success that I’d like to share. That’s why I think success can be spelled:

C: COMMITMENT to making the Cubs the very best team and reinvigorating the brand.

U: UNWAVERING and complete dedication to continuous improvement in all elements of the team.

B: BELONGING and connection as players to each other, and the team to the neighborhood, the city and the greater “Cubs World”.

S: STRATEGIC FOCUS in all facets of the business of baseball and great tactical execution of a winning plan that aligns all efforts.

A Commitment to Success

The Ricketts family purchased the Cubs in 2009 for $875 million. Seven years later they became World Series champions. Tom Ricketts, an investment banker, led this family acquisition. Tom’s father is Joseph Ricketts, one of the founders of TD Ameritrade, and the family’s worth is in the billions of dollars. Ricketts made it clear that this was a long-term investment in a storied baseball franchise and that partnership is with the neighborhood, the city and the vast array of fans across the globe.

You might ask yourself how the Cubs got to be such a household name given their lack of success over the years. They even had losing seasons in 5 of the first 6 years under Ricketts as the “retooling” took place. But I’ve met plenty of people who in their formative years would skip school or work to buy a cheap seat in the bleachers, catch some sun, drink some beer and, by the way, watch a little baseball.

Despite their poor performance for many years, the Cubs are popular across the country. One of the major reasons for their popularity is the fact that they were owned for many years by the Tribune Corporation which also owned WGN television. WGN was on cable across the country back to the 70’s and 80’s and the Cubs broadcasts, when they only played during the day, were standard fare for afternoon programming. Folks from across the country got exposed to the Cubs in this way.

The Ricketts family commitment to the success of this storied franchise included the following critical decisions:

I am writing this less than a week after the Cubs game seven victory. Yes, I am in a Cubs sweatshirt but still need to buy my World Series gear.

The commitment, unwavering dedication and strategic focus have all been consistently well executed to create the current situation for the Cubs. Lovable losers no more. From a business perspective, the Cubs and the Ricketts family have demonstrated how to develop and deliver results in grand fashion.

But to me it’s the belonging and connections that mean the most about the Cubs success. The team was fun to watch and although they are still very young, they played so well as a unit with various interchangeable but highly skilled parts. And they enjoyed not only their success but what it means to the city of Chicago and lifelong Cubs fans.

During the rain delay late in the seventh game, the players huddled together and reinforced and encouraged one another. If you ever played on a really good team at any level, we can only imagine the connection they feel to each other. My experience is that the best teams and organizations also take great pride in “belonging” to one another and their group confidence is a hallmark of their success.