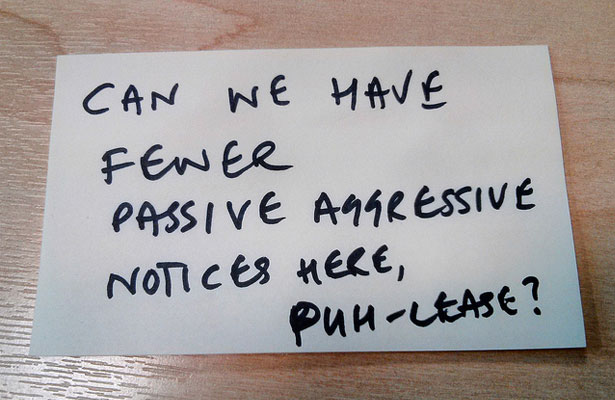 A client asked me this question recently when I discussed with them how perhaps they needed to be more consistently assertive in their interactions in the workplace. There was obvious confusion about what the term passive-aggressive meant when we had a good dialogue about that. In this post I’d like to clarify the distinctions between assertiveness, aggressiveness and being passive. I do not believe one can ever be too assertive but you have to be clear on the distinctions.

My client was actually considering the concept of passive-aggressiveness in light of their reflection on a particularly contentious discussion within their team about various paths to pursue regarding some rather pivotal challenges. They regretted being less aggressive about their thoughts and perspectives during the dialogue about various options for dealing with these challenges. They also recognized the need to be passive when their boss got on his soapbox about what he wanted to do.

The problem is there is a lot of confusion about the differences among these three different positions and I use this chart to demonstrate them: 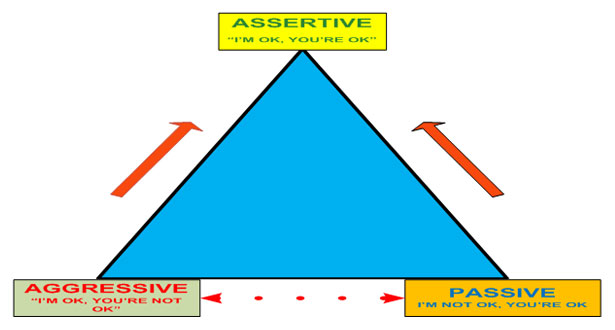 The “I’M OK, You’re OK” model came from a book with the same title by Thomas A. Harris, M.D. that came out in 1969 and sold over 15 million copies. Let me explain each point on this triangle.

In her book, Mastering Assertiveness Skills, Elaina Zuker suggested the following to help us understand the basics of being assertive.

These “rights” may seem self evident, to borrow from a famous document, but they require confidence and conviction to live by.  That’s why I mentioned that I do not feel someone can be too assertive, especially when you consider the last right – to choose NOT to assert yourself when you wish.

Now let’s return to the issue of being passive aggressive.

Referring to the diagram you’ll see that I have lines that lead from both being aggressive and being passive towards being assertive. That is a direction or goal that I think is important for people to consider from either of those starting points.

You’ll also notice that there is a dotted arrow that connects aggressiveness with passiveness. If someone is counseled about being too aggressive, they often retreat to doing very little and being passive; however, this is not their natural state and the aggressiveness will leak out. If someone is encouraged to be more assertive, when they have traditionally been passive, they often overdo it and can seem aggressive. And thus, people will flip-flop between the passive and aggressive modes of behavior.

This passive aggressive behavior is often demonstrated by snide or denigrating comments, subtle accusations, mean-spirited or cutting humor, and a fairly active rumor mill. It all seems fairly indirect, but it is usually profoundly negative.

In summary, choosing the assertive path is rarely easy and may not always be popular, but it will be respected. Ask yourself:

I look forward to your thoughts. Make sure you leave a comment to share what you learned and how you’re going to use it.

Note: this post originally appeared as a guest post on Switch & Shift. You can read the original here.