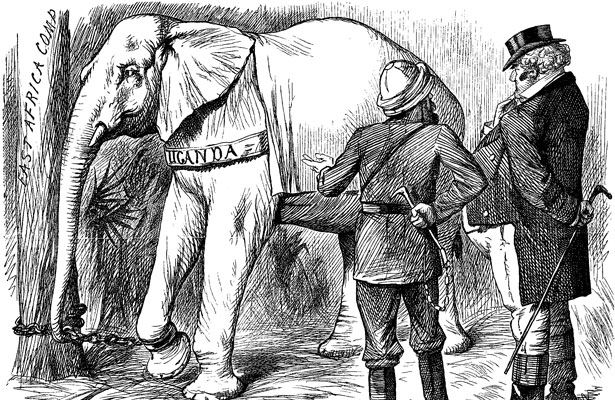 Everyone stumbles over the truth from time to time, but most people pick themselves up and hurry off as though nothing ever happened. – Winston Churchill

There are times when we leave a meeting or listen to a presentation and you say to yourself, “Why didn’t they talk about ‘Subject X’ because that’s really what the problem is?”

The next, obvious question is why didn’t you bring it up? This reflects the existence of the “elephant in the room” and as described in the book The Elephant in the Room: Silence and Denial in Everyday Life by Eviatar Zerubavel:

…is thus metaphorically evocative of any object or matter of which everyone is definitely aware yet no one is willing to publicly acknowledge. As such, it has become the most common cultural representation of the open secrets around which conspiracies of silence typically revolve. (p.11)

In the context of everyday organizational life, there are some issues that it seems no one wants to raise or discuss. There are various reasons for this and it may often feel like this is a matter of inertia, but:

…as the foremost expression of co-denial, silence is a collective endeavor, and it involves a collaborative effort on the parts of both the potential generator and recipient of a given piece of information to stay away from it. A conspiracy of silence presupposes discretion on the part of the non-producer of the information as well as inattention on the part of its non-consumers. (p.48)

So people act with discretion for various reasons in not dealing with key issues that may need to be discussed; others in the same meeting either are NOT paying attention or gloss over the issue.

Not paying attention is obviously a poor excuse for not thinking through or discussing some key issues, but purposely avoiding them is another altogether.

In other words, the very act of avoiding the elephant is itself an elephant! Not only do we avoid it, we do so without acknowledging that we are actually doing so, thereby denying our denial. (p.53)

So what causes this issue to consistently repeat itself in organizational life everywhere? Here are some reasons you may have encountered for NOT identifying the elephant in the room:

1. No one else seems to be aware of the issue or concerned but me. If I chose to raise it, I could be:

It calls into doubt another’s:

It reflects BADLY on another’s:

So we are reluctant to identify the Elephants in the Room for a variety of reasons: fear, discretion, ignorance, lack of preparation, or convention. How does this continue to happen?

Many often consider the Elephant in the Room concept along with the fable of “The Emperors’ New Clothes” (read here).

“But he doesn’t have anything on!” cried a little child.

“Listen to the innocent one”, said the proud father.

And the people whispered among each other and repeated what the child had said.

“He doesn’t have anything on. There’s a little child who says that he has nothing on.”

“He has nothing on!” shouted all the people at last.

The Emperor’s New Clothes is a wickedly clever fable that was written in 1837. I looked it up in the context of a reference to the elephant in the room topic and marveled at its clever insights. The two men who weave these marvelous clothes come to town and make it very clear that “…the clothes made of their material possessed the wonderful quality of being invisible to any man who was unfit for his office or unpardonably stupid.”

What a wicked conceit! And they were very vocal about this qualification. So no one wanted to be “found out” as unfit for office or unpardonably stupid and thus went along with the charade. People were reluctant to speak up!

I’m sure the child was both unaware and unconcerned with being “found out” – he was just a child so he said what he saw. How do we get ourselves and our organizations to speak like the child and bring the elephant into the light? It is difficult to do.

Before that can happen, however, those party to conspiracies of silence must be ready to hear the proverbial child’s announcement that the emperor has no clothes. Yet as Enron’s Sherron Watkins found out when she told Chairman Kenneth Lay that their company’s accounting methods were improper, she had evidently underestimated “the seriousness of the emperor-has-no-clothes phenomenon.” (p.69)

Like whistle-blowers, silence breakers are also ridiculed, vilified, and often ostracized. Aside from their immediate punitive function, such retaliatory tactics are also designed to intimidate anybody else who contemplates breaking the conspiracy of silence, which indeed prevents many potential silence breakers from actually doing so. (p.72)

This description sounds like there is actually a deliberately scripted or well thought approach to stifling silence breakers. My experience is that it’s much more subtle than that – one of more omission than commission.

When you think of the normal workday of many executives, they often go from meeting to meeting with very little preparation from one to the next. Many of the reasons for ignoring the elephant are more related to the ADD work world rather than any thoughtful or calculated response. We fail to pay attention and just try to get through the day – go on to the next meeting. This may explain the persistence of the behavior, but it does NOT excuse it.

Part of the reason we resent silence breakers is that… they disturb cognitive tranquility. Even more importantly, they try to force us to acknowledge things we specifically choose to ignore to avoid getting hurt or upset. (p.74)

This is especially true when the cultural norm may be to not “rock the boat” or challenge people, assumptions or processes. The problem is that better ways of doing things are not discussed, ongoing concerns are not resolved and creativity and innovation are diminished.

Behavior that is inconsistent with organizational values can also continue unchecked. So beyond the opportunity to continuously improve the organization, which can be stifled, not confronting “bad” behavior can create a cynical reaction to the professed values of the organization that weakens and erodes them.

Like so many other things in life, it comes down to courage!

True stability results when presumed order and presumed disorder are balanced. A truly stable system expects the unexpected, is prepared to be disrupted, waits to be transformed. – Tom Robbins

So where the rubber hits the road, is how do we deal with these elephants; how do we say the emperor is naked in a constructive but forceful manner? Here are some suggestions:

Personalize the discussion in a constructive manner and allow appropriate dialogue. This forces the group to be empathic to the impact of what they are doing:

Play a little dumb to be able to raise the issue or perspective you think is needed:

Set up the opportunity for discussion of the “elephant” in the next meeting by:

If you couple some of these suggestions with the necessary leadership courage, there may be opportunities to minimize having things left unsaid that truly need to be discussed.

Have a great safari!