Kim Scott was a long time director at Google and is currently a faculty member at Apple University. In addition, she’s an acclaimed coach for companies like Twitter and other Silicon Valley notables.

One of Kim’s goals was to create a company that had “bullshit-free zones where people could love their work and working together”.

Scott believes that the most important thing a boss can do is “focus on guidance: giving it, receiving it and encouraging it.” You can read, or view the video of her presentation, Radical Candor: The Surprising Secret to Being a Good Boss here.

Scott contrasts guidance with feedback which is “screechy and makes us want to put our hands over our ears”. As an executive coach, one of my key roles is to collect input on a client and provide them that feedback. I hope that my feedback is never “screechy” but I do believe that it causes discomfort from time to time.

Now, remember, my clients pay me to do this but that doesn’t mean that the feedback doesn’t come as a cold slap in the face sometimes. I then provide support and ideas to create goals that help my clients perform better in ways that they value and resonate with them. I provide them with guidance.

I’m a pro at this but very few managers have either been taught this art well or work in “bullshit-free zones” where it is given and received with the best of intentions. Scott shares a great illustration of what guidance in the form of radical candor is all about.

An Example of Radical Candor

When she first joined Google she was on a key account that was doing phenomenally well. She gave a presentation to the executive team of Google and they were floored with her results, asking her what they could possibly do to provide more resources to continue this trend. She said, “so… I sort of felt the meeting went okay”.

After the meeting, Scott’s boss, Sheryl Sandberg, who later wrote Lean In: Women, Work, and the Will to Lead, asked her to take a walk with her. Sheryl provided some great feedback about what she liked about the meeting and how pleased she was with the performance of Kim’s team. Kim suspected a “but” was coming and sure enough, it did.

Sandberg said, “But you said um a lot.” Sandberg asked her if that was because she was nervous when speaking and offered to provide a speaking coach if she wished to have one. Scott’s responses were to listen but to fundamentally brushoff this feedback. After all, her business was going gangbusters. Could these ums be so critical?

Finally, Sheryl said, “You know, Kim, I can tell I’m not really getting through to you. I’m going to be clearer here. When you say um every third word, it makes you sound stupid.”

“Now, that got my attention!” Scott remarked.

It’s important to note that Sandberg did not say that Kim was stupid, only that she may sound that way to others when she said um every third word. This is Scott’s definition of radical candor.

The chart below shows the vertical axis, caring personally, or the “give a damn” axis. The horizontal axis, challenging directly, she calls the “willing to piss people off” axis.

Scott says that “challenging others is difficult for many people; saying anything short of positive feels impolite. But once you become a boss, it’s your job to be equally clear about what’s going wrong and what’s going right.”

The secret of this model is that employees will accept valued guidance, or challenging them directly if they know you care personally about them.

Sandberg had demonstrated this many times to Scott as she made her transition into the Google organization. Scott mentions that radical candor also has the following elements, and created the acronym HHIPP:

The last P reflects the fact that Sandberg didn’t say, “You’re stupid.” She said, “You sound stupid when you say um.”

Scott is clear on the fact that although this may seem simple it is not easy to do. However, when you think about the other options in the model she’s developed, you can see why Radical Candor is vastly superior. Here’s the complete chart. 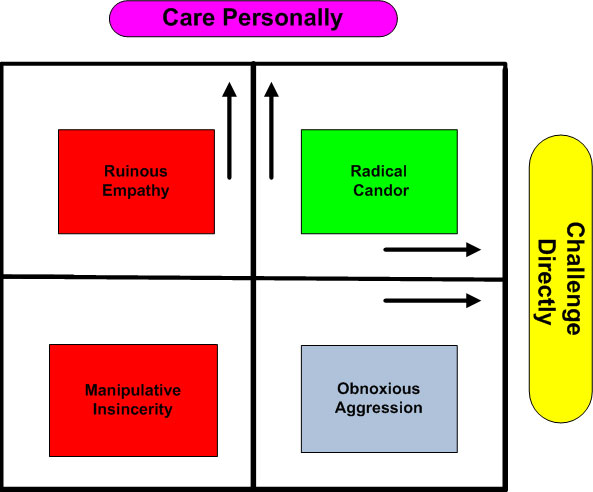 Obnoxious Aggression: when you challenge without caring consistently, you risk being labeled as a jerk, or even worse, an asshole. Nevertheless, Scott says it’s better to challenge directly than not. But, she does not suggest you try being an asshole on for size. If being an asshole is a sustainable management model in your organization, you may want to think about employment elsewhere.

Ruinous Empathy: Scott says this is where a majority of management mistakes happen. By not being direct or willing to confront or provide guidance, you are subverting a key managerial responsibility. Scott recalls working with a manager named Bob who wasn’t really very good at his job but was a very likable guy. By not providing guidance, his performance continued to deteriorate until one day she had to call him in and let him know that he was being fired. Bob was shocked but also angry that he had never been given the guidance or support to try to turn around his behavior.

Manipulative Insincerity: this is generally not sustainable for a manager, but it may be a response to difficult feedback where an individual had been obnoxiously aggressive. If aggressive individuals are confronted, their response can often time be a full retreat to being passive. They will often swing between being passive and aggressive, hence the term passive-aggressive.

To maintain an organizational atmosphere where radical candor can work, Scott had four suggestions for any leader:

I encourage you to watch Jill Scott’s presentation on radical candor. Then ask yourself: