The minister at my church recently referred to a communication concept called triangulation that brings currency and relevance to interpreting biblical verses.

If your brother sins against you, go and tell him his fault, between you and him alone. If he listens to you, you have gained your brother. But if he does not listen, take one or two others along with you, that every charge may be established by the evidence of two or three witnesses. If he refuses to listen to them, tell it to the church.

Now, I realize you don’t read my posts for biblical inspiration, but I often refer to the concept of triangulation in discussions about communication dysfunctions with my clients.

Here’s a graphical example of what we mean by triangulation: 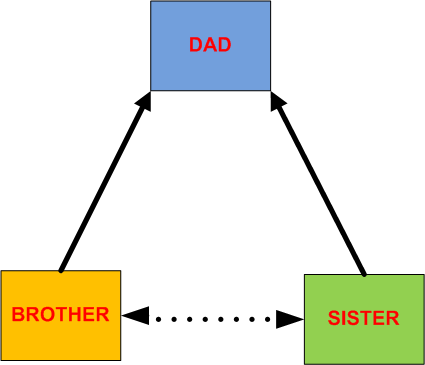 What often happens is that each sibling will express their frustration to a “neutral” third-party – in this case, Dad (or Mom). They are looking for support and acknowledgment for themselves and their rationale for their position.

This triangle also represents the reality of what professional counselors or therapists do in their role as “Dad”. They are trained to give a person perspective and support in dealing with their challenges. They may also bring both parties in to assist in their discussion or mediate between them.

Of course, they are trained to do this and have to be as objective about things as they possibly can be.

The “Dads” in this situation often get sucked up into this, wanting to help both sides, but in reality, as I often must tell my clients, “Dad” must push the issue back to the brother and sister before he weighs in, having them share the concern and hopefully reach some resolution between themselves first.

The brother or sister must go to the other first – and hold them accountable – and seek resolution about that matter before discussing it with another.

Now, your emotions may be running high relative to the other party but it is unfair to “dump” this on a third-party because this can put them in an awkward or uncomfortable position.

The “Dumper” is exploiting the other person, the “Dumpee”. The Dumper may just be looking for a sympathetic ear, and some personal reassurance, but nothing will get resolved until brother and sister actually hash this out between them.

Be Neither a Dumper nor a Dumpee

So here are some recommendations to not allow yourself to get sucked into the snare of triangulation:

Your reputation should be a reflection of how you resolve issues just as much as what outcomes occur. If you cannot reach an agreement and the issue is substantive enough, then raise it to your “Dad” or an appropriate person who you both feel can be effective at helping you sort through things.

Each side needs to be accountable for how they behave in this situation. If you can agree on how you will both abide by the decision reached, that is a real plus.

I have seen people needlessly hurt because they failed to refrain from saying anything about another who was not there to represent their side of the story.

I look forward to your thoughts or comments.